My Thoughts on Rainbows :) 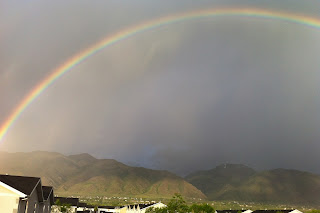 I love and support my gay friends and family, and sincerely wish them the best in their search for happiness. Personally, however, I believe gay marriage is wrong. That said, another person's decision to engage in this behavior deprives me of neither my life, nor my liberty, nor my personal property. I therefore have no right to impose force to stop the behavior.  If I personally have no power to impose my beliefs on someone else in this matter, I cannot lend that power to a government.  In other words, without using unethical threat of force, gay marriage cannot be made illegal. Our own declaration of independence explains that government should exist to protect the rights to life, liberty and property. The role of government is to protect rights, not to grant them or to take them away. It is to outlaw behaviors that are a direct threat to life, liberty, or property. Government does not exist to outlaw all things that are wrong, nor to provide incentives for moral behavior. Additionally, government created only to protect rights could not interfere in or regulate an agreement between parties. I therefore do not believe government has any business regulating marriage, whether that be between a man and woman, woman and woman, man and man, etc.

A couple of facts confuse the issue, the first being government benefits. In order to encourage traditional marriage, (not within the scope of government) there have been tax, health, retirement, and legal benefits afforded to heterosexual couples only. If not for these benefits in the first place, there would be no need for the political drama played out today.

Secondly, there is fear that, if government recognizes gay marriage (also outside the scope of government), churches that oppose gay marriage on moral grounds - and they, being private entities, have every right to do so - will be forced to perform gay marriages or face legal sanctions. This WOULD threaten the life, liberty, and property of the church members/officials asked to perform the marriage. It would result in a no-win situation in which a church official must  perform a gay marriage against his conscience or face jail (loss of liberty) or fines (loss of property). And as government HAS shown a tendency to OVERREACH in these types of matters, on "discrimination" grounds, I believe this fear is, unfortunately, justified.

Both of these concerns would be resolved, resulting in peaceful, non-threatening, true equality, if government were properly limited. Therefore, in my opinion, the "gay marriage issue" has very little to do with marriage, morality, families, children, etc and EVERYTHING to do with our vastly overgrown government. No surprise there.