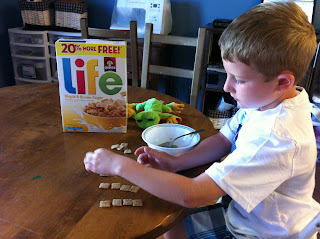 Sooooo...we decided to continue our "LIFE" skills with the study of "cereal" numbers. Ha ha, I crack myself up! These things just come up. Like this:

"Mom, what is 3 times 2?" (or some other randomness)
"Well, use some cereal pieces and figure it out." (This is how he learned addition and subtraction, too)

This usually works it's way into a full-blown math lesson. Today we explored the concept of division and multiplication being opposites, but, where you can swap the order in multiplication, that doesn't work for division. I love seeing the look of ecstasy on little boy's face when a concept like this sinks in. Math makes so much sense! Expecially when it involves your favorite cereal :)

We got sidetracked, though, when he asked why it is called multiplication. Queue "Greek and Latin Roots." Since I want to begin studying roots with him anyway, this seemed like a good time to start. I had bought a stack of index cards for this express purpose. Bring out a red and a green marker, and we were ready to go. We learned that "multi-" means many in Latin, which explains why multiplication means adding the same number to itself many times. And, not wanting to leave out the Greeks, we learned that "poly-" means many in Greek. We wrote each root on the front of an index card (red for Latin, green for Greek) and wrote the definition along with some examples of English words using the root on the back. This is the part where little boy ran excitedly upstairs to tell Daddy that he now knows what "multi" and "poly" mean in Latin and Greek :) Isn't learning fun! Who ever said we couldn't do "school" on Saturday? 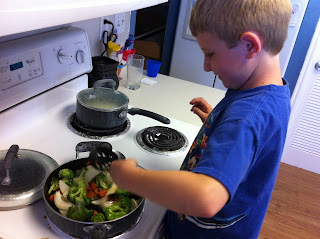 Anyway, back to our actual life skills. We are now done with our official "life skills week." We have learned how to do the laundry, prepare certain foods, clean the entire kitchen after dinner from clearing the table to starting the dishwasher, clean the bathrooms, and dust. There are things I missed, I'm sure, but we'll have time for all that later. Last night I had him do the laundry without me telling him what to do. I was there to answer questions, and there were many, but he moved the process along. Seeing as I found a black sock in the whites, and several white socks in the darks, we definitely need some practice, but he really has learned a lot! Now I just have to remember to let him help out more, since he now has some good skills.
Labels: addition bathroom cereal cleaning commutative property division food prep Greek Homeschool Latin laundry life skills manipulatives math multiplication roots subtraction