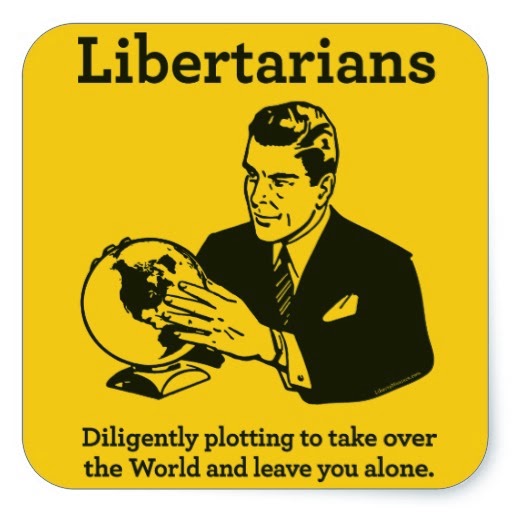 Earlier this year, I joined the Libertarian Party of Utah and the national Libertarian Party. I did so with the intention and hope of participating and voting in primary elections and becoming more involved in political activism.

As of yesterday, I have cancelled my membership in both organizations and am no longer a Libertarian. I will elaborate on my reasons later on, but I want to make one thing clear:

I still consider myself a libertarian.


Notice the difference? Upper-case “L” versus lower-case “l” – Libertarian vs libertarian. This is a subtle but important distinction, at least to me.

Here’s how I see it:

Upper-case “L”, means you are a member of the Libertarian Party – the political organization that, among other things, nominates candidates for public office and gets them on ballots.

Lower-case “l”, means you are a student of, advocate, or somehow associate yourself with libertarian philosophy.

Back in 2008, I decided to look into what this guy named Ron Paul was saying and why he was saying it, and that led me to learn about and eventually embrace key principles of libertarian philosophy, namely the Non-aggression Principle (that the initiation of aggression/violence/force is inherently illegitimate except in self-defense), property rights, and limited government.

Up until that time, I had voted strictly Republican and had been swept up in the neo-conservative dogma and rhetoric spewed forth by such notorious figures as Rush Limbaugh and Sean Hannity. (I can't stand to listen to either of them now.)

Since that time, I have distanced myself from the Republican Party (registering and voting Republican only to support candidates like Ron Paul) and I have used the terms "libertarian", "constitutionalist", and "classical liberal" to describe my political views.

I have chosen to support candidates and issues that I believe will advance the cause of liberty, reduce the size and scope of government as it exists today, and return to the form of government espoused and set forth in the Declaration of Independence and the Constitution – regardless and irrespective of party affiliation.

When I moved to Utah nearly 2 years ago, I registered to vote, but did not register with any political party. I was simply “unaffiliated”. Earlier this year, I felt I needed to become more involved in local and state politics. I needed to register with a political party to be able to vote in primaries, since there are no open primaries in the State of Utah. So after some consideration I decided to join the Libertarian Party of Utah and participate in its state convention to vote on candidates for public office.

Shortly after joining the state party, I also joined the national Libertarian Party with the intention of getting involved in presidential elections and maybe even becoming a delegate to the national convention and participating in that fashion.

While I mostly agree with the platforms of the state and national Libertarian parties, it is their practices in one particular area that greatly influenced my decision to leave them.

I fully acknowledge that if I were to carefully scrutinize every practice and policy of every political party out there, I would not find a single one that I agreed with 100%. I understand that if I do want to affiliate with a political party, I must take the bad with the good and try to work within it to effect the changes I believe are needed. However, there are some issues that I consider to be of utmost importance - issues with which I believe I must not be ambiguous or ambivalent. One such issue, the issue in question, is that of marriage - specifically, same-sex marriage legalization.

The Libertarian Party – especially the national party – supports and actively advocates so-called “marriage equality” and the legalization of same-sex marriage. I am fundamentally opposed to this for both philosophical and religious reasons.

In attempting to explain their support for same-sex marriage legalization, the party claims that it will be a major step in the direction of getting government out of marriage completely. I disagree. My understanding of libertarian philosophy is that it is wrong to initiate aggression against anyone. Therefore, it is wrong to use government to impose my beliefs on others by force. Yet that is exactly what those who support same-sex marriage legalization are doing – trying to use government to change its definition of marriage and thereby force everyone else to accept it under threat of violence (because how else does the government enforce laws but under threat of violence)?

As for my religious reasons, I believe marriage is a sacred institution, ordained and established by God from the beginning. It was established by God as part of his Eternal Plan of Happiness, for the perpetuation of mankind and the creation of families – the fundamental unit of society. I support the traditional definition of marriage: that marriage is between a man and a woman.

That said, I also believe that the government should not be involved in marriage to the degree that it is - that nobody should have to obtain permission or licensure from the State to be married.

If two individuals of the same gender want to enter into a long-term committed relationship and share survivorship, hospital visitation, and other rights currently enjoyed by state-licensed married couples, I am not opposed to that. I simply do not believe the definition of marriage can or should be changed in order to make that happen.

I also believe this issue is closely related to freedom of religion and religious expression, and that changing the definition of marriage to include same-sex relationships opens the door to state infringement of religious rights. Religious leaders who are opposed to same-sex marriage on religious grounds may be pressured by the State to perform same-sex marriages, or even punished for not doing so by threatening to revoke their tax-exempt status or arresting and prosecuting those who defy such a mandate. Supporting legalization of same-sex marriage may result in a perceived increase in rights for some, while leading to a very real and serious infringement upon the rights of others. Is that not what inevitably results when you involve the State?

Furthermore, for most people, perception is reality. Though I have been vocal in my support of traditional marriage, my affiliation with a political party that supports same-sex marriage legalization (at least in practice) may cause people to misunderstand or jump to conclusions about my beliefs. I don’t want there to be any question as to where I stand on the issue of marriage. I support traditional marriage, but I want the government out of the marriage licensing business. Pushing to extend the government’s reach and power in this or any area is counterproductive and dangerous. More is not less.

I must digress – I don’t intend for this to be an exhaustive treatise on the subject of marriage. Others have put many of these ideas and concepts into words far better than I could hope to (please check out www.discussingmarriage.org for a good example).

Suffice it to say, I support ending government licensure of marriage, but I do not agree with the Libertarian Party’s approach to doing so (through advocating same-sex marriage legalization). This is one issue on which I cannot compromise.

I support the Libertarian Party’s advocacy for more freedom and less government. Overall, I think their message is consistent (though their practices may not be). It is certainly more consistent than those of the Republican or Democratic parties. I still see the LP as an ally of those who truly do want to see more liberty and prosperity in our country.

The need of virtue and religion among the people was made clear by the founders of this nation.
John Adams, a signer of the Declaration of Independence, the Bill of Rights, and the second President of the United States said:

“We have no government armed with power capable of contending with human passions unbridled by morality and religion…Our Constitution was made only for a moral and religious people. It is wholly inadequate to the government of any other.”

Samuel Adams said: “A general dissolution of principles and manners will more surely overthrow the liberties of America than the whole force of the common enemy. While the people are virtuous they cannot be subdued; but when once they lose their virtue then will be ready to surrender their liberties to the first external or internal invader.”

The Libertarian Party advocates limited government and more freedom, yet they seem reluctant to formally affirm that morals, virtue, and personal responsibility among the people are vital for such a system to work.

This is why I cannot support the Libertarian Party. They've got the libertarian philosophy part down (in policy, if not practice), but are deafeningly silent when it comes to acknowledging the need for virtue among a free people.

Through my brief membership in the Libertarian Party, I have met some good people and good candidates for public office who are champions for the cause of liberty and who I will continue to support. But I've come to realize that, while the platform of the LP is consistent, its practices leave much to be desired. So, I must bid them farewell and continue on my personal political journey.

As of the time I write this, I'm still a registered Libertarian in the State of Utah, though I am not a member of the Libertarian Party. Because of the overwhelming influence of the Republican Party in Utah, I am considering registering Republican and taking the "Ron Paul approach" - try to represent the libertarian position within the party and work within the existing system for a return to the Constitution and to liberty.

If I do choose to become an official member of a political party again (going beyond mere voter registration affiliation), it will be a party that more closely represents my positions and views. It will be a party that holds to the classical liberal ideals of the founding fathers, to libertarian philosophy. Along with promoting less government and more freedom, it will be a party that - without hesitation - acknowledges and affirms the morals and values upon which this great nation was founded and the necessity of virtue among the people. And the practices of this party must be consistent with its platform and policies.