How to Become a Political "Over-activist" in 10 Easy Steps 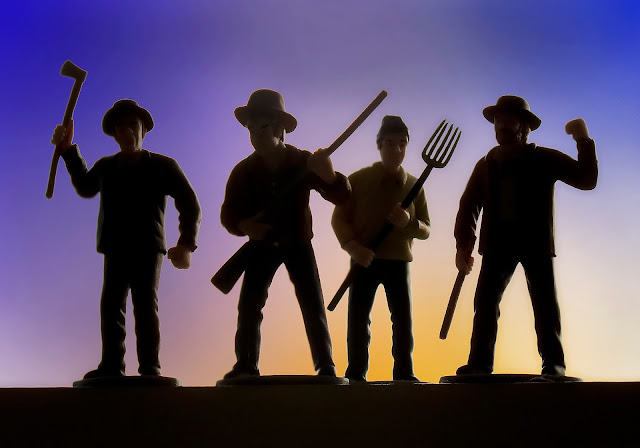 The Political “Over-Activist’s” Top 10 – Suggestions on how to “get involved” that will conveniently not result in any actual change, thereby preserving fodder for further gossip and outrage.

1. Make up your mind beforehand. Things will never change. You really have no say. “They” will never listen. Repeat these statements daily until you thoroughly believe them. This is called - as Steven Covey says - beginning with the end in mind.

2. Demand change from an inappropriate entity. Doing this will almost never result in any positive change, and will successfully raise angst on both sides. This is good. They will be powerless to address your concerns and will appear to be “passing the buck.” This, in turn, will draw others into the sweet swirling tide of conflict. Examples of this tactic might include complaining to your state legislator about the affordable care act (over which they have no control), or demanding that the state school board allow parents to set the educational standards for their local public school (they cannot allow this since the Utah State Constitution requires the state school board to set those standards, but your audience will not know this). Make sure to capture the responses of public officials to these kinds of demands. Post their responses on blogs and social media, preferably with inappropriate or no context.

3. Generalize. Speak about broad, overarching trends and topics, optimally in meetings that have a very specific focus. For example, in a meeting about the new SAGE testing, if given any opportunity to voice your opinion, range in topic from Common Core, to “fuzzy math,” to Bill Gates and his globalist agenda. Do not cite specific evidence unless it is either outside the scope of the current forum or violates tactic #2 above. Some onlookers may think you are a little crazy, but it will be worth it to draw the others in. If too many people use this strategy, it may result in tightly controlled meetings or in less opportunity to address those in power. This is simply an added side benefit and can be used to spark further outrage.

4. Blame. Whomever. It is detrimental to the frustration factor to acknowledge that government is made up of many individuals and groups, with widely disparate opinions and positions. All people who are involved in government drink the same Kool-Aid. Always use the second person “you” or “you guys” when addressing anyone “from the government” about any matter. This will maximize defensiveness all around.

5. Demonize. This goes hand-in-hand with #4, but allows you to single out individual members of the government “machine,” whom you wish to characterize as particularly demonic. Once someone has made a mistake (real or perceived – such as those generated by the use of these strategies), that person BECOMES a mistake. Remember, these are not people – who go home to their families at night, have kids, teach primary on Sunday, or own puppies/kittens – these are government robots. Once defective, always defective. People don’t change. Robots change even less.

6. Allow “smarter” or “more informed” people to form your opinions. They really do know what they are talking about. Refrain from reading controversial primary source documents such as the 600-page “Common Core” document. This will just confuse you further and open up the dangerous possibility of your finding something positive. (And then you might be forced to be specific/constructive in your criticism, in clear violation of strategy #3.) It is simply not worth the cognitive dissonance. Trust me. Some ways to use this strategy might include getting all your information from one source, parroting someone else’s questions, or pasting your name into every form letter that comes along. This strategy will effectively turn your representative government deaf to your repeated pleas, further convincing you of statements you made in tactic #1.

7. See conspiracies everywhere. Your job is to induce a sort of intellectual autoimmune disease. Because there ARE actual conspiracies, many will find your claims credible and trust you. If you are really good, they will trust no one else, least of all, anyone from “government.”

8. Be sure to make frequent use of the word “unconstitutional.” Keep in mind that the word simply means “unfair” or “disagreeable.” Any assumed correlation with the actual Constitution is outdated. (If you have read said Constitution, you are automatically disqualified from using this strategy.) Remember that this can be used at any level of government, possibly qualifying more people, since most have not read their state constitution.

9. Declare anything you need/want a “right.” Because government’s “constitutional” obligation is to protect your rights, any opposition here is, you guessed it, unconstitutional. This strategy will pit you delightfully against not only “government” people but against many others as well, securing your valuable status as the underdog.

10. Finally, since you have by now amassed significant opposition and obliterated any possibility of reconciliation, you must securely believe that yours is the only opinion that has basis in logical fact. If that is true – and it is (repeat this until you believe it and anytime thereafter if you find yourself doubting) – then everyone else is either an idiot or a conspirator.