From Gaming Desktop to (Nearly) Obsolete Tablet: Using a BlackBerry PlayBook as My Primary Computing Device

We've lived in Cache Valley for nearly a year, so the 1-year lease on our lovely townhouse/condo is nearly up. After much discussion, soul searching, and prayer, we've decided to stay put and sign a 2-year lease.

While we love this place, it has one less bedroom than our previous home, and we've had to be creative with where we put my computer stuff and where Cara puts her craft-making materials.

Since we'll be here for a couple more years at least, I've decided it's time to once again go through my gadgets and computer parts and get rid of some clutter. It's time to simplify.

One big decision I made was to sell my custom-built behemoth of a desktop computer and save up for an iMac or Mac Mini. I like the smaller footprint and simple elegance of the Mac platform.

I've removed the SDD/HDDs from the gaming rig and will be actively trying to sell it. But in the meantime, what will I use for my personal computing needs at home?

I may regret it, but I've decided to use my (nearly) obsolete, yet tried and true BlackBerry PlayBook as my go-to device until I get a Mac.

BlackBerry (formerly known as Research in Motion) is on the ropes as a company, actively looking to sell. The future of their current products and services is uncertain. The PlayBook, as a platform, is for all intents and purposes a dead platform. So why on earth would I even consider it?

Because it just works (for me).

And with my most recent tech purchase - the BlackBerry PlayBook Mini Keyboard - this little tablet just became a whole lot more usable and useful. 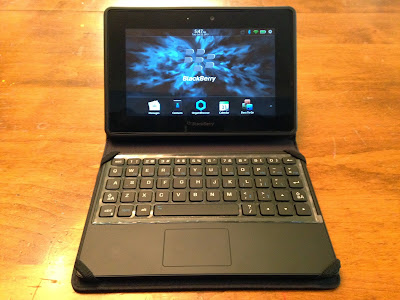 This keyboard is much better than the no-name brand keyboard I bought with the tablet. Not only is it easier for me to type - I need some tactile feedback and the old keyboard was too...squishy - there is also a built-in multi-touch trackpad. Yes, the PlayBook has surprisingly good mouse support! In your face, iPad! (The iPad doesn't have bluetooth mouse support unless you jailbreak it.)

Sitting at my desk with my PlayBook hooked up to my 25" HD monitor, it almost seems like a laptop or desktop. In fact, that's how I'm writing this blog post! I took the above picture with my iPhone, uploaded it to my SkyDrive account, downloaded it to my PlayBook, and embedded it in this post.

I've also started experimenting with side-loaded Android apps to compensate for the poor app selection in BlackBerry World, and there are a few that have worked surprisingly well. I'll cover side-loading more extensively in future blogs.

It will be several months, at least, before I get a Mac. I'll try to use my PlayBook as my primary computing device and document my progress here. This may be a short-lived experiment, but I'll try my best to make it work!
Labels: blackberry blackberry playbook computers gadgets playbook technology