Skip to main content
Labels
Posted by Dallin Crump May 22, 2013 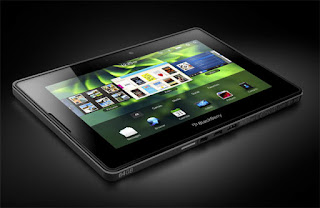 In an earlier post, I explained why I chose a BlackBerry PlayBook tablet over similar-sized tablets like the iPad Mini, Kindle Fire HD, Nexus 7, and Samsung Galaxy Note 8.0.

I wanted to give you an update about my opinion of it after a week of owning it (again).

I say "again", because I owned a PlayBook once before, but sold it because I had access to an iPad through work at the time. I've switch jobs and left the iPad behind, so I was looking for a 7"-8" tablet that gave me the most of what I wanted with the least amount of money (and hassle). That tablet, as I explain in my other post, still happens to be the PlayBook.

After powering up the PlayBook for the first time, I was greeted with a setup wizard that prompted me to configure my PlayBook for use. It was very easy to follow and in no time I had connected to my home WiFi network, downloaded the most recent OS update, and was on my way.

Connecting all my email accounts and calendars took some doing.

Gmail gave me the most hassle because I had 2 factor authentication enabled, which for the PlayBook requires you to set up app-specific passwords for email and calendars. I had to do a couple of Google searches to make sure I was doing it right. Also, you have to use IMAP, which means it doesn't automatically sync your contacts or calendar.

Linking individual Google calendar accounts was the trickiest part. I found the following resources helpful in that regard:

Once I had my accounts set up and working great, it was really nice to be able to use the built-in email and calendar apps, which I think are among the best of any that I've used on any mobile device. You can tell a lot of time and effort went into the design of these apps and they work great.

Anyone who looks into the PlayBook will soon discover that the thing it lacks most is apps. There are a few apps that are very good and really shine, but its app library is extremely lacking compared to Apple's juggernaut App Store and Google Play.

That said, there are a few apps that have enhanced my PlayBook experience and that I highly recommend. I don't normally pay for apps, but considering the selection is so limited, I didn't mind paying for these ones.
These are just a few of the apps I've downloaded. I'll likely be doing another post soon just about apps and I'll talk about some of the others I use and go into more detail.

The overall look and feel is excellent. It feels like a solid, quality device, not cheap and plasticky like other tablets (Samsung Galaxy Note 8.0 comes to mind). The rubberized backing is nice and makes it feel like you've got a good grip on it when holding it. The silver BlackBerry logo on the back is a nice touch and adds some class. You can tell some thought was put into the hardware design.

The screen is great. The resolution may not be HD quality, but for a 7" tablet it's more than good enough for me. The colors are crisp and vibrant, motions are fluid, and it's plenty bright.

And front-facing speakers! They seriously make all the difference when watching a video without headphones.

I made a separate blog post about the accessories I purchased along with my PlayBook. I'm really glad I decided to get them, because they've greatly enhanced my experience and are helping me to get more value out of my tablet.

My favorite accessory is the rapid charging stand, which is great because I don't have to fiddle with cables and it takes much less time to charge. I also like that it stands the tablet up so you can easily see it from where you are. Great for watching movies or for using the PlayBook as a digital picture frame or table clock.

The PlayBook may be a 2+ year old tablet, but it has some of the best video out features of any tablet on the market today.

The first time I tried connecting it to an external display using a mini HDMI cable, I was blown away at how crisp and smooth the picture was. It really does output video in full 1080p. By default, it displays in mirror mode, but you can turn that off and use a feature supported by several apps that lets you choose which app to display on the external display.

So, for example, you can have a video playing on the external display while you go about using your PlayBook, using other apps, etc. This feature is extremely useful if you want to use the PlayBook to drive high quality presentations. You can seamlessly transition between videos, web browser, and a slideshow without missing a beat, and all from a 2+ year old 7" tablet!

Presentation mode on the PlayBook is really one of my favorite features about it, as it showcases the raw multitasking power of the PlayBook hardware and OS.

After 1 week of use, I don't regret my purchase. The research I did beforehand paid off, and I feel the PlayBook is the perfect tablet for me right now. It has the right combination of features and functionality and is a great gadget to have handy, whether for quick web surfing, note taking, reading, or the occasional movie or game. I look forward to tinkering with it more and seeing what else it can do.
Labels: blackberry blackberry playbook gadgets playbook reviews tablets technology